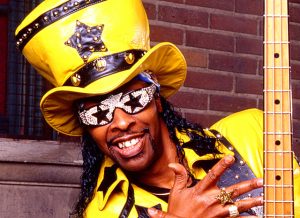 Bootsy Collins was a child prodigy of the funky bass, as he was personally recruited by the Godfather of Soul to play in the James Brown Band, before he was out of high school. He was born in Cincinnati on October 27, 1951.A? Bootsy played with James Brown from 1969 to 1971. In 1972, he joined George Clinton’s Parliament/Funkadelic conglomerate and anchored such funk essentials as “Mothership Connection.”

Collins, in the mid-seventies, spun off his own group, “Bootsy’s Rubber Band,” and scored hits with “Stretchin’ Out (in a Rubberband)”, “I’d Rather Be With You,” and “Body Slam.” Known for his “star-shapped sunglasses” and glittering, outlandish stage costumes, Bootsy was dubbed the clown prince of funk because of his sly, wink-and-grin lyrics and his “Hendrix-esque” talk-sing vocals.

Bootsy recently contributed to crtitically acclaimed documentary on the Motown studio band, the Funk Brothers. The documentary is entitled “Standing in the Shadows of Motown.”